Marlene Booth, Producer/Director
Marlene Booth teaches film at the University of Hawai’i and is an award-winning filmmaker, who has worked in film since 1975, for public television station WGBH-TV in Boston and as an independent filmmaker.  She has produced and directed several major documentary films screened on PBS and cable television, at national and international film festivals, and in classrooms nationwide.  Her major films include:  “Yidl in the Middle:  Growing Up Jewish in Iowa,” (1999), “When I Was 14:  A Survivor Remembers,” (1995), “The Double Burden:  Three Generations of Working Mothers,” (1992),  “The Forward:  From Immigrants to Americans,” (1989), and “They Had a Dream:  Brown v Board of Education Twenty-five Years Later,”(1980). 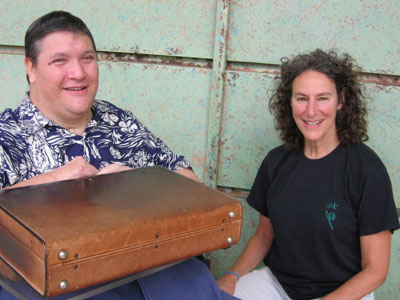 Kanalu Young, Producer
Kanalu Young passed away in 2008.  Pidgin:  The Voice of Hawai‘i is dedicated to his memory. An associate professor of Hawaiian Studies at the University of Hawai’i-Mānoa, Kanalu’s teaching and research interests included portrayals of indigenous Pacific Island cultures in film and television. He appeared as an historian in the PBS “American Experience” documentary, “The Massie Affair.” He produced and wrote the video, “Making the Grade,” about the importance of culture in building self-esteem and academic success at a charter school in Honolulu.  The host of a monthly issues and answers television program on community access television, Kanalu wide interests included songwriting, chant composition, chanting, and ink and pencil drawing.  He is sorely missed.

Rodney Ohtani, Director of Photography.
Rodney Ohtani has worked as an award-winning director of photography for the past 25 years most notably on several documentaries for PBS, including the Emmy-award winning “Simple Courage.”  His recent documentary work includes co-producing and photographing the Hawaiian cultural films of Eddie Kamae, among them “Sons of Hawaii,”  “Hawaiian Voices,” and “Keepers of the Flame.”

Keith Kashiwada, Narrator
Keith Kashiwada is an actor, writer, director and professor of speech at Kapi‘olani Community College.  In 2008, he won the Regents” Medal for Excellence in Teaching from the University of Hawai’i.  He acted in the movie “Fishbowl,” and appears locally in theatre productions, most notably at Kumu Kahua Theatre.

Stanford Chang, Post Production Supervisor.
Stanford Chang works as a director of cinematography and as an all digital, post-production editor, running Smoke and creating 3D animation, for Gravity Post Production.  Among works he has edited are award-winning spots for the Super Bowl, and the PBS screened, ITVS-funded film “Patsy Mink:  Ahead of the Majority” (2008).